Assistant Professor of Asian Studies in Sociology and Anthropology

YOUR FOOD ENVIRONMENT | WHEN OUTSIDE BECOMES INSIDE

Welcome to "Food Environment", an emerging paradigm in Environmental Studies – A new way to think about food.

Intended learning outcomes include students gaining the ability to talk about personal and public health, diet and nutrition, and how personal choices and responsibility impact sustainability and the environment.

The environment flows into us through food

Our relationship with the environment is most intimate in our choice of what we put into our bodies. Consider that the environment flows into us in the food we choose to eat – When outside becomes inside.

A food environment suggests the system boundaries of food production, distribution and consumption.

According to Centers for Disease Control and Prevention (CDC, 2014), the food environment is mainly:

"The physical presence of food that affects a person’s diet, a person’s proximity to food store locations, the distribution of food stores, food service, and any physical entity by which food may be obtained, or a connected system that allows access to food."

When considering that our relationship with the food environment is most intimate in our choice of what we put into our bodies, editor and lecturer Peter Coan suggests, "Perhaps we can draw a further useful distinction between an individual's available, or potential, food environment and his/her actual food environment – that is, between the foods a person has the opportunity to eat, and the foods s/he actually eats."

Supporting this idea, Coan notes that corporate supermarkets largely mediate the potential food environment for many people simply by limiting the range of foods available on their shelves, and corporate advertising further distorts the choices and preferences which people have in buying foods – that is, selecting the inputs to their actual food environment, located typically in their kitchens and refrigerators.

While conducting research on personal health management for Food Environment, I developed a shortlist of key topics, namely diet, exercise, toxins and stress.

I soon discovered that I was not the first to make this list.

My personal research led me to the story of Dr. David Servan-Schreiber, French physician and neuroscientist, who developed the "Four Pillars" to examine the rising issue of cancer and other chronic diseases through the lens of prevention, rather than treatment.

The "Four Pillars" of anti-cancer

Dr. Servan-Schreiber's best-selling book "Anticancer: A New Way Of Life (2007)" and research-based insights were brought to life by Morgan Freeman, executive producer and narrator of "The C Word", the 2016 documentary.

"You need to know the truth about food and why eating the right way can save your life."

According to Campbell, understanding and implementing a whole food, plant-based diet is scientifically proven to improve health, wellness, and to mitigate many of the chronic illnesses of our time, such as heart disease, diabetes and cancer.

Much more than a diet, Campbell considers living on whole and plant-based foods as, "Living a whole life."

Popular quotes on food and health

Popular videos on food and health

Among environmental managers, "sustainability" is a foundational idea whereby people consciously and accountably take action in mitigating or avoiding the depletion of natural resources.

A sustainable food environment includes a system of food production, transportation, and consumption, which maintains an ecological balance while meeting our health and nutritional needs.

Chemicals in our food system range from man made to those which occur naturally.

Factsheet from Physicians for Social Responsibility

Man-made chemicals that may be harmful to you

Naturally-occurring food toxins that may be harmful to you

Naturally-occurring food toxins (Dolan, Matulka & Burdock, 2009) can be studied from a variety of perspectives. For example, even too much of a healthy food can have a toxic effect on the body. Healthy foods that contain natural toxins can include vegetables, beans and grains.

Other natural toxins can result from spoiled foods or are produced in certain types of moulds and algae. For example, Funji, including some varieties of mushrooms, can be highly toxic to humans. Ergot funji (Schmale & Munkvold, 2017) found in flowering grass or cereal, such as rye, are linked with physical and mental health issues as far back as the Middle Ages. Metalloids, such as arsenic, are naturally occurring elements strongly linked to public health issues world-wide.

The Agency for Toxic Substances and Disease Registry (ATSDR) provides a database of information about toxic substances and how they affect human health.

According to Harvard University, addressing the complex problems associated with toxic food environments requires urgent communication and collaboration among government, industry and local institutions. As individuals, what steps can we take toward personal and public health responsibility to best mitigate a toxic food environment?

What the Health | Trailer

In an article published in Nutrition Digest (2011), the American Nutrition Association (ANA) outlines a “Food Desert” as a geographic location, area or region where fruits, vegetables, and other whole foods are, for the most part, unavailable. 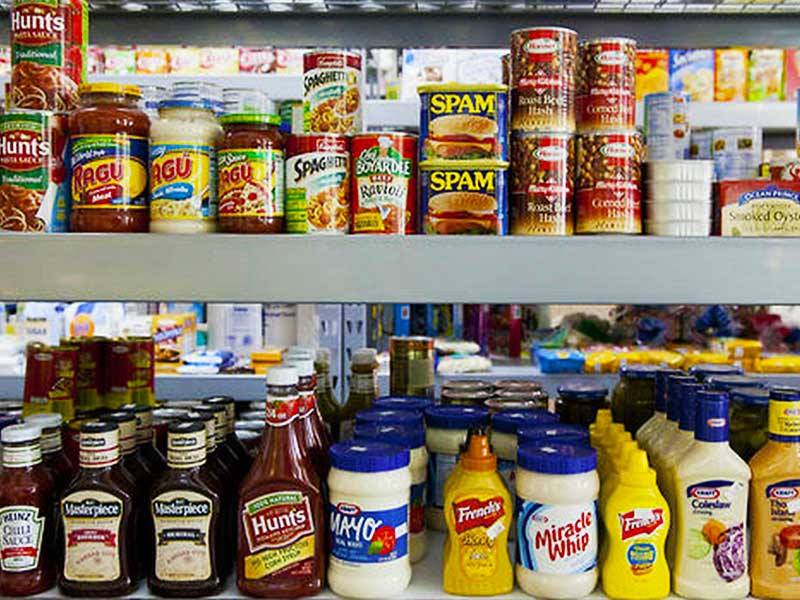 Typical canned and processed foods in the rural US

Arguably, a food desert is actually a nutrition desert, meaning that while food is generally available, the food environment does not provide appropriate nourishment to people who rely on these products to survive – That is, fast foods and processed foods which are particularly high in processed sugars, fats, and salt.

To address the issue, Centers for Disease Control and Prevention (CDC, 2017) suggests that individuals and communities can create community gardens (CDC, 2011a), share in the upkeep and production of the garden, and organize local farmers’ markets (CDC, 2011b).

Contemporary terms and trends in healthy dietary lifestyles for discussion

Food environment and the media

Three reasons to think about what we eat

“I am a part of all that I have met.” – Alfred Tennyson